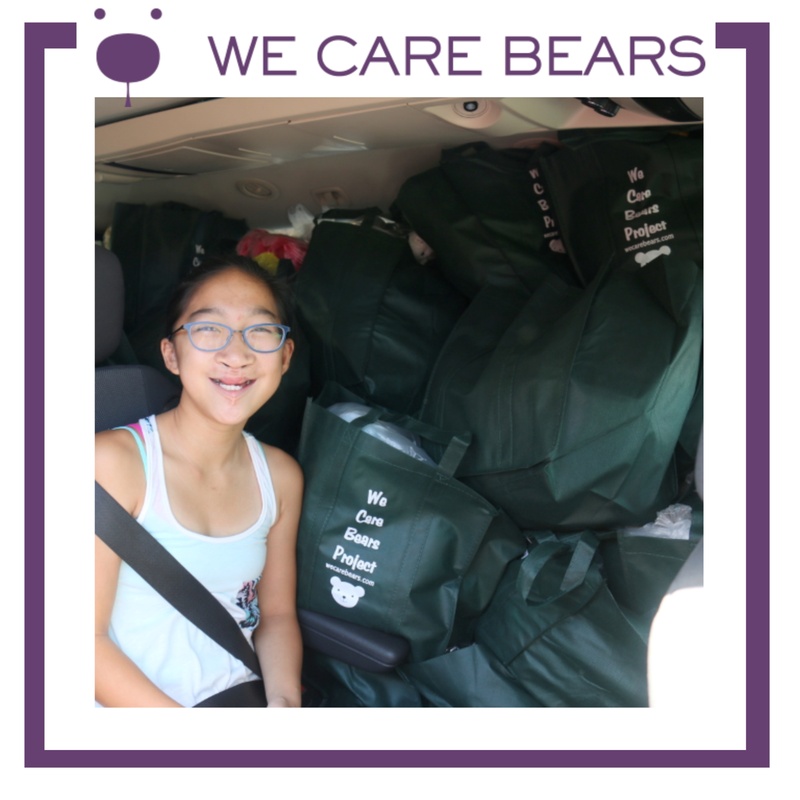 My FAVORITE days are delivery days and today was a BIG one. 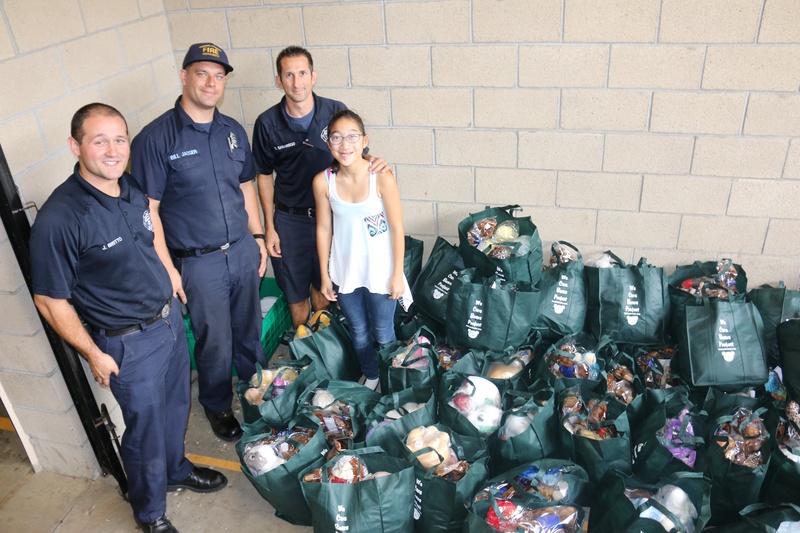 I was so happy to return to Orange County Fire Authority with 700 stuffed animals for kids they meet on calls who may be scared or injured.

The second stop today was an amazing new We Care Bears participant....Orange County Family Justice Center. Lieutenant Kazakos was so nice and showed all over the justice center. They do the most amazing work there and I was so happy to be a tiny help. 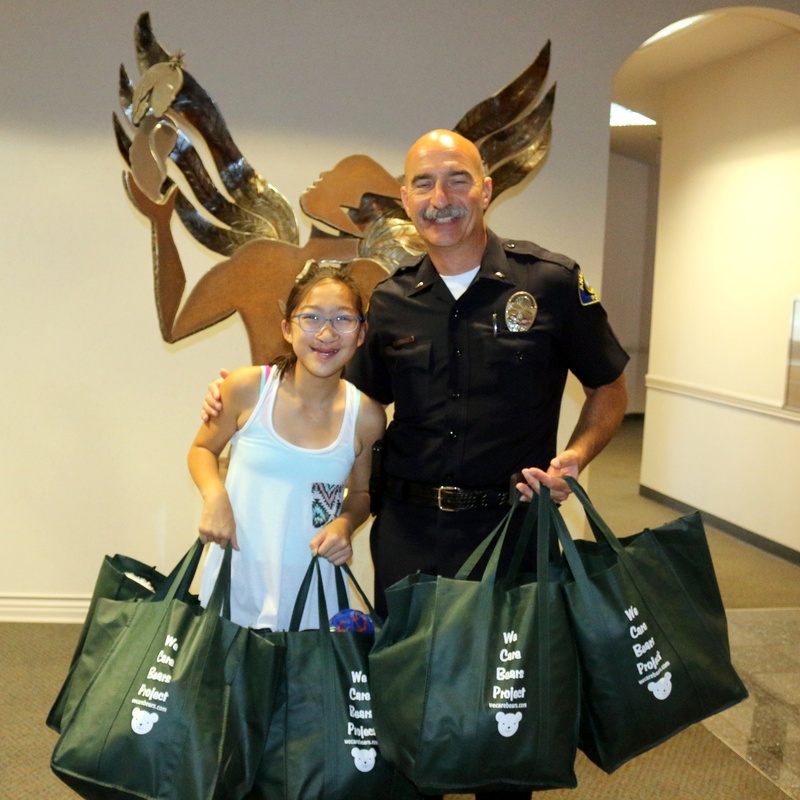 Tomorrow is a another delivery day - I can't wait.

For me, school starts again on August 19th so I just finished up my school clothes shopping.  My FAVORITE place to shop for school clothes and shoes is Kohl's.  Kohl's is also one of my favorite places to buy stuffed animals for my project.  Kohl's Cares stuffed animals are only $5, they are great quality and the perfect size for We Care Bears bags.  Even better, Kohl's donates 100% of the profit from the sale of these animals to kid's health and education projects nationwide.  So when you buy a Kohl's Cares plush and donate it to We Care Bears you help TWICE!!  You know what's even more wonderful, 4 of these stuffed animals are on sale now for just $3.50 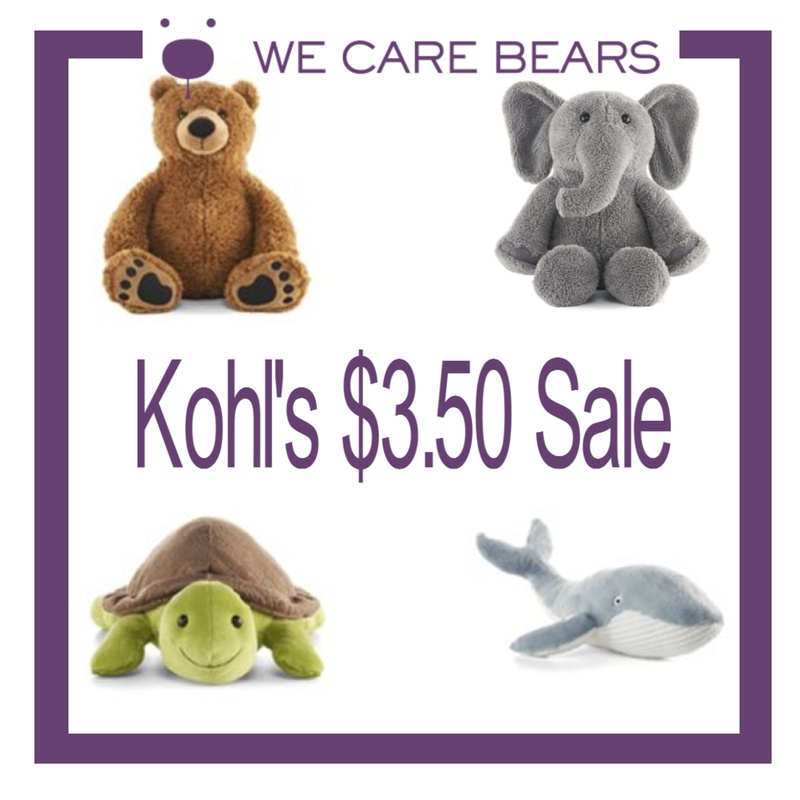 If you're school clothes shopping at Kohls.com I hope you'll consider picking up a couple of these great plushes and sending them to We Care Bears. 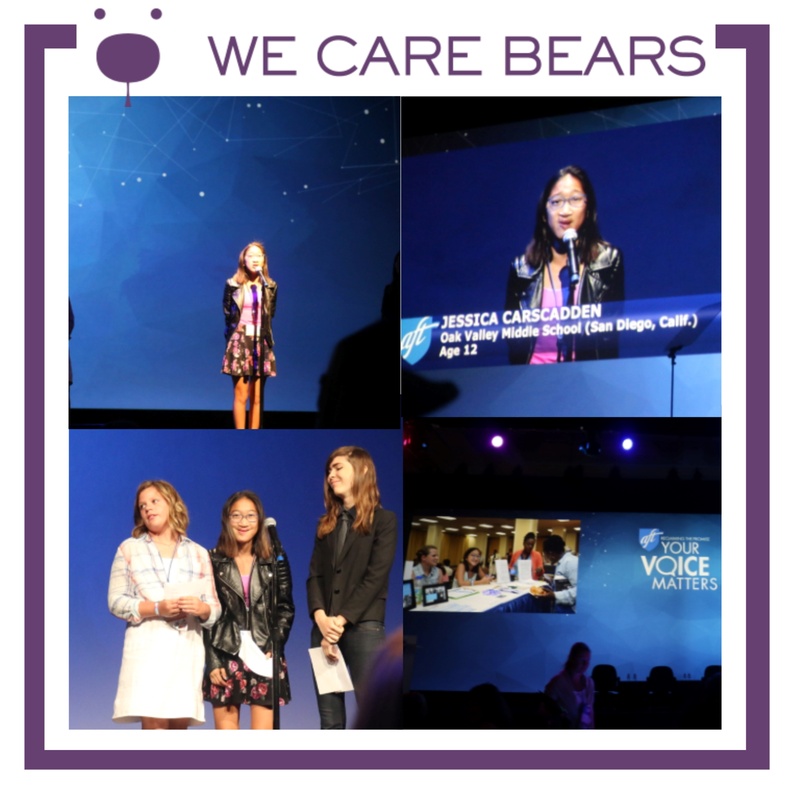 Thank you to everyone at AFT Teach 2015 in Washington, DC for inviting me to share my work with you.  Everyone I met was so warm and welcoming and really made me feel like MY voice mattered too.  It was such a fun and informative convention and I was honored to be a part of it. 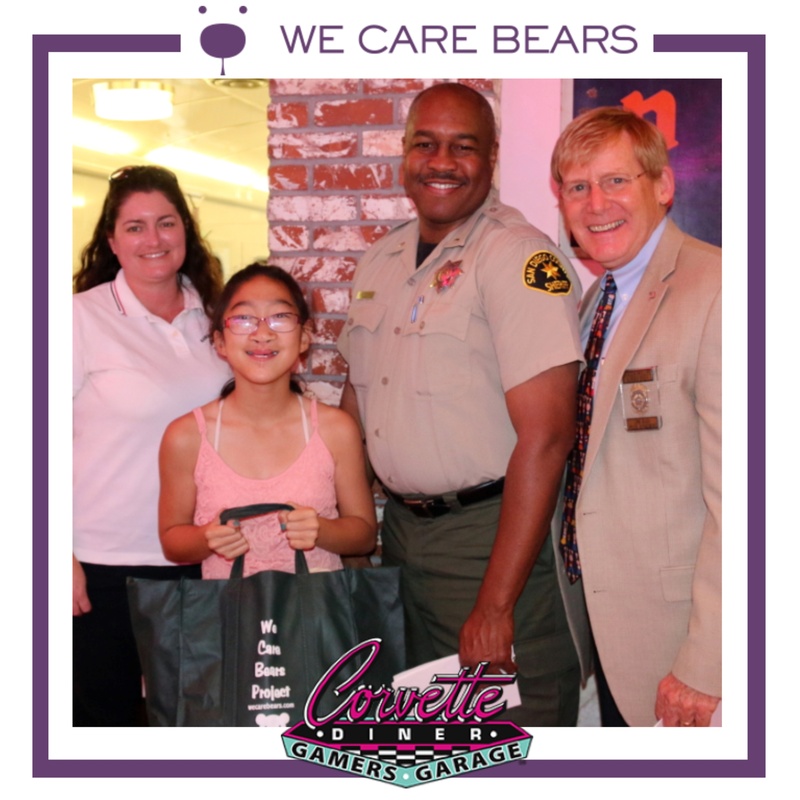 When I was in New York for the Peace First Fellowship Gathering we had a great session called a "Brain Trust". We got to meet with community leaders and other fellows to get ideas on how to solve a problem we are having or make our work better.

I liked the idea so much I wanted to have a local brain trust lunch to get input from local first responders who directly work with We Care Bears. It was GREAT. Leslie Cohn from the Cohn Restaurant Group very generously hosted us at the Corvette Diner. We were a small but might group that included Chief Phillips from Long Beach Police Department, Lieutenant Herb Taft from the San Diego Sheriff's Department and Julie Taber from the Rancho Santa Fe Fire District. It was a great opportunity to get some input from people who know how my project works and get ideas from them about changes I can make to make things work even better for them. Not only that, but the Corvette Diner has great food and everyone so very nice to us.

I want to say a GIANT thank you to Leslie Cohn and everyone at Corvette Dinner for hosting our lunch and to Ms. Taber, Mr. Taft, and Mr. Phillips for taking time out of your busy day to come talk to me. I hope to make this a yearly event to keep making my project be the best it can be.

He Was Some Terrific Pig

When I started We Care Bears hoped for two things, first that adults would take me seriously when I talked about what I wanted to do (I was 9 at the time) and more importantly that We Care Bears would bring comfort to kids in scary situations.  I am always incredibly grateful when people write to me and tell me that their child got a stuffed animal.  This letter actually made my mom cry.  My big brother has asthma and she remembers how scary it was, I'm so happy the ambulance had a stuffed pig for this sweet girl...

My 3-year-old daughter had her first severe asthma attack out of the blue this past weekend. She was given a stuffed Ty beanie pig from your charity in the ambulance and it was all she had in the ER and then during her stay in the hospital.

The nurses brought her little pig, which she named Wilbur, a tiny breathing mask and medicine dispensers, arm bands, tape, and even a stethoscope, so while all these new and pretty scary things were happening to her, she would administer them to Wilber with great care. She almost threw up in the ER and was given a spit bowl, which became Wilbur's bath. When her father left and we were alone in the hospital room, she actually told me that Wilbur was scared and didn't like it there, and I told her she should comfort him and let him know how everyone there was really nice and would take good care of him, which she did. We just got home and removed all of Wilbur's tape bandages and she declared that he is all better.

Little Wilbur was such a huge gift; he was her companion in a scary situation. He made her feel unafraid of the hospital and like she was not alone. He was Some Terrific Pig!

Thank you so much to the Dorman family. It was so much fun meeting you yesterday and sharing a little about my project with you. Your donation is going to make a lot of kids feel loved and comforted. 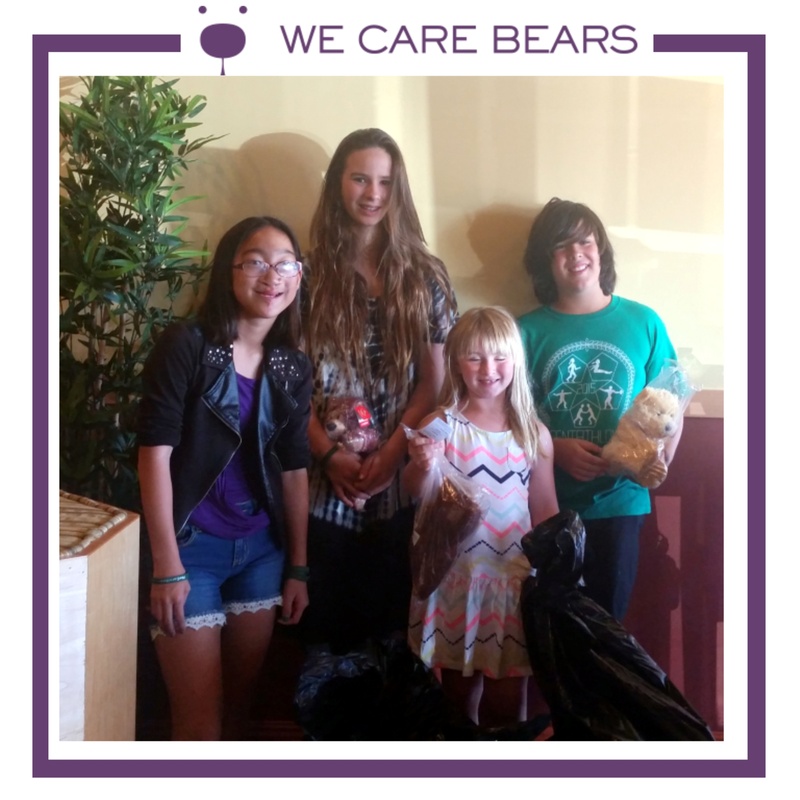 Scatena Daniels Communications is a creative communications agency dedicated to socially-responsible companies and nonprofits across the nation. They believe that being KIND is good for business so when they celebrated their 5th anniversary We Care Bears received the gifts.

Scatena Daniels collected nearly 200 stuffed animals for We Care Bears.....THANK YOU SO MUCH. 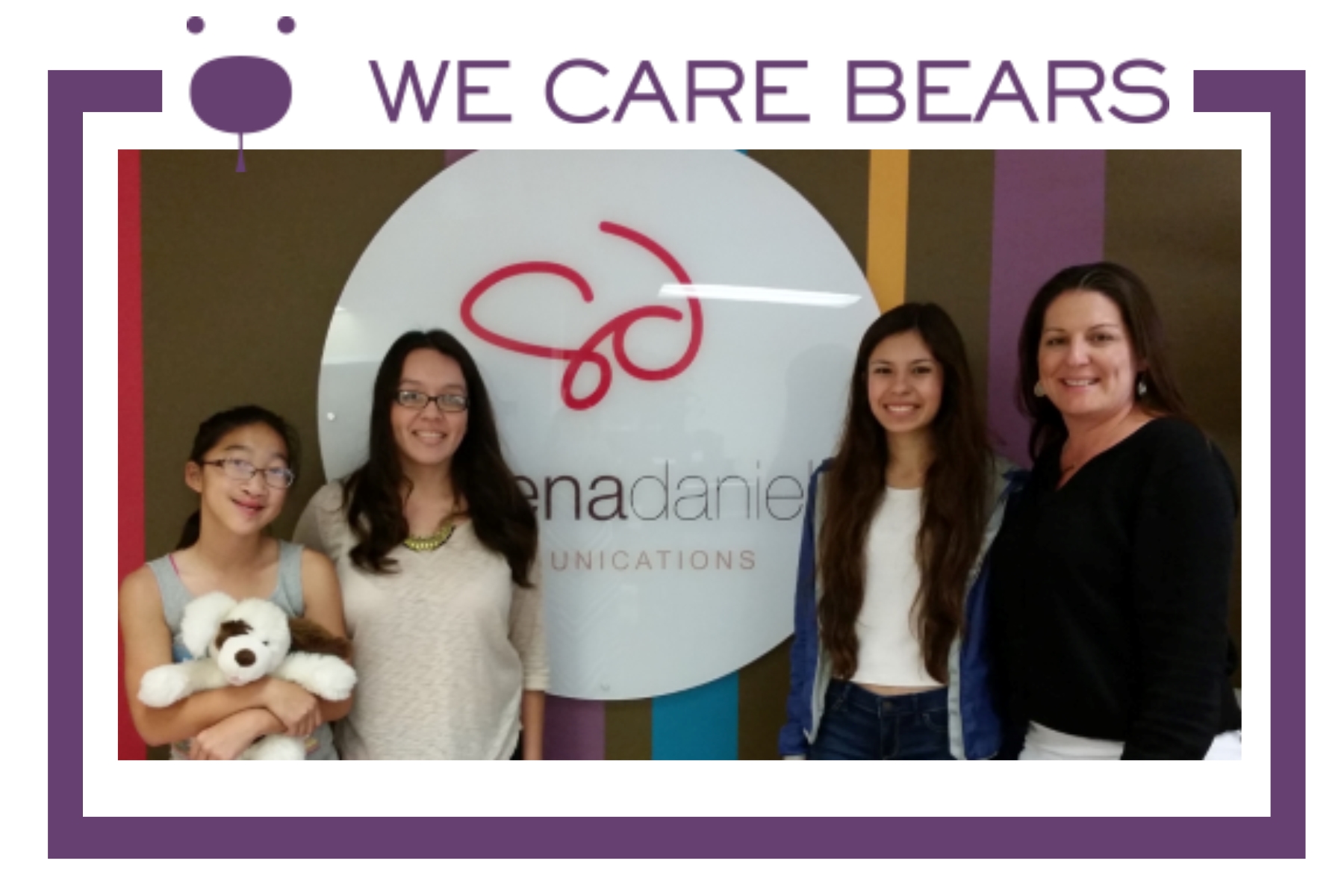 A lot of people ask me what kind of stuffed animals we need or can use so I thought each week I would try to find stuffed animals that were good deals and fit the size needs for We Care Bears.

This Ty bear is a favorite for lots of kids because it has soft fur, is huggable, and the perfect size.  Plus if you order through my Amazon link it helps me TWICE.  That's a double good deal.

A lot of people ask if I accept donations of beanie babies...they are small and not really huggable...BUT they are some of my favorite donations because I sort them all out and put them aside specifically for Chadwicks Center.  Today I was able to deliver 200 of those cute little guys.  So if you know anyone with new beanie baby collections they want to find a special use for point them my way!! 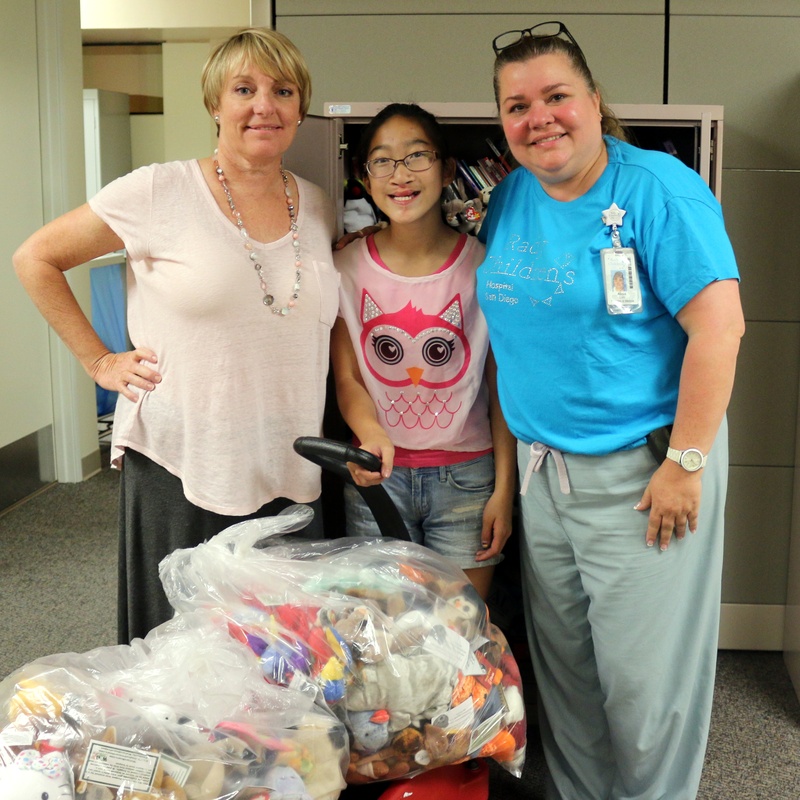 We Care Bears In Lakeside.... 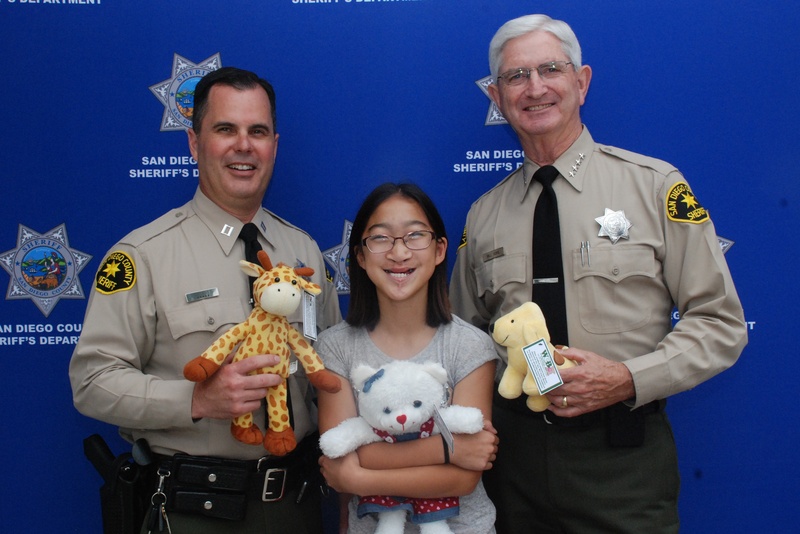 Today was the grand opening of the Lakeside Sheriff's Substation in East County San Diego. A ribbon cutting ceremony was held today and the public was given a tour of the new facility. Among those in attendance included Sheriff Bill Gore, Supervisor Dianne Jacob, as well as local law enforcement and county leaders. I was so happy to be able to take 6 bags of We Care Bears to the substation this morning but couldn't really stay for any of the events because, well, school. Today is "even day" at school and it has all my favorite classes. But I was so happy to actually get to meet so many great people at the Sheriff's station today, including Sheriff Gore.

Thanks everyone for being so kind and generous with your time this morning, I know things were crazy before the big event.